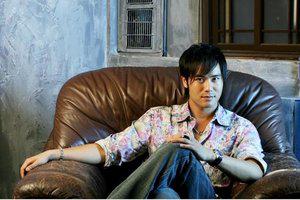 Born the first son to an airline pilot and artist, David Chen spent most of his childhood in the capital city of Taiwan. As a young teen, he moved to Los Angeles from Taipei to receive an American education. Rather than spending his time in a library as his parents had hoped, he grew to love sports and singing instead, and began to follow a path different from one in academia. By the late '90s, his talented voice had won various karaoke contests throughout southern California. After finishing university in 2001, he immediateley returned to Taiwan to pursue his dream of an acting career. His fresh face and tall stature instantly landed him many opportunities, and he soon began modeling for fashion giants such as Diesel and DKNY, as well as making appearances in TV ads and music videos.